Lost tape from the shoe box vault! Some never-before released material from the Halfbreeds.

Sometimes your art is the message in a bottle. 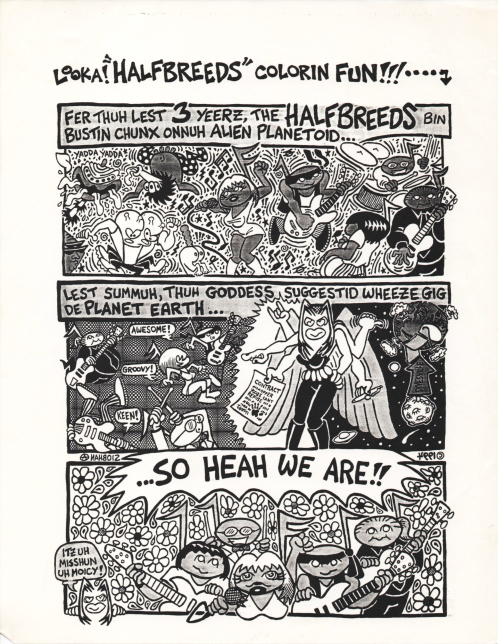 What’s the best thing to do when you can barely think and the weather is crappy and you’re visiting your mom who is a smoker and you are not? Look through boxes of stuff to see what you can find. I’ve been looking for two things mainly — old vocal exercise tapes with my coach Don Lawrence and videos of my performances. I found neither of those things. I did find one box with artwork and journals that have moldered and mice have made nests of, LPs that Chewie the pet rabbit has been snacking on, and, (redemption!) photos that are in pristine condition of my band The Halfbreeds!

Have you ever been called a groupie? I think the closest I ever came to being a groupie was during my Madonna-wannabe phase (yes, I went through it), or maybe my Siouxie Sioux phase (I was a goth, too, though I recall I smiled way too much to pull it off well). In either of […]

In the book I found not one, but two, band flyers from when I played with the Moldy Dogs in 1999. The Moldy Dogs had been around in different incarnations since the 70s (maybe even the late 60s). This version was Paul Major, Wolf Roxon, and me.

Paul Major and Wolf Roxon are two of the most talented and prolific songwriters and musicians I have ever met, let alone played with. Between the two of them, I’d say that they have about 2000 original songs. They are both incredible guitar players – and man – they can sing harmonies! We had a lot of three-part harmonies happening, and if the key wasn’t the best for my voice, they’d just change the key! Wow! What a concept! No bitching and moaning, or telling me that the key of D is what sounds best for guitar.

This is me singing along to my old band The Halfreeds’ version of Gotta Get Away by the Blues Maggos. This was made by my friend TJK Haywood (Wooden Thomas) about 2 or 3 days before I left Brooklyn. I was packing up to leave for Arizona! There were a lot of Halfbreeds videos made, […]