I don’t know what it’s like to be completely in the moment; to feel the overhead lights bearing down on me like a torture device. I don’t know anything anymore. My mind is oozing pork skin and slimy onions. I don’t know if my heart can take it. My nose is full of dread; the pork trickles in my sinuses behind my eyes. Behind my eyes I am telling S I love him and am really meaning it and a bucket of pork fat spills on my head and I slip and fall in it. He decides to make the best of a disgusting situation and dives into the grease, slipping and sliding somewhere between my eardrum and my eye socket.

I hear him laughing when I tell him that all I ever wanted to tell him is that I love him.

I don’t know why I don’t have any Gabrielle Roth CDs. I believe that we should all be making money as writers, my two friends and I. At the very least we are all natural philosophers and are in the habit of picking about things for their meaning and meaningfulness. What’s the use of all this? I don’t know.

. . . This is not an hour and a half of focused writing; this is a purge of spooge. I don’t know what I’m going to do with all this power. Not think about it, just do. Let it all trickle away.

I don’t know . . . how I can keep living the way I’m living—with super neurotic roommates and stinky smells coming through my floorboards. I don’t know if I can survive this violin. It’s an undulating magic carpet that has got me swinging from bedpost to bedpost. That dulcimer could have my hands playing it if I just give myself the chance to trance out with it. 50 strings to tune. The sound is heavy and sparse at the same time.

I don’t know the name of my great grandmother. I think it is Anne Boehm. She had a tortoise shell comb she wore in her hair; my grandmother showed it to me from time to time. She would take it out of a velvet-lined box she kept on her dresser and she would let me run my fingers over its smoothness for a few minutes. It was smooth and large, mottled with browns and golds and deep greens that were almost black.

Grandma would tell me little stories about her mother while I fondled the comb. I know GG-ma had wooden teeth, thanks to my grandmother. I don’t know why, but Grandma was at a roller rink and something her mother did made her angry. GG-ma was not a great roller skater, and Grandma took a chance and gave her mother a shove. Her mother, not knowing what hit her, lost control and smashed her teeth on the railing that encircled the rink. Grandma says her mother never knew it was she who knocked her teeth out.

Oh, Great Grandma was a fortuneteller and a poet. She read fortunes for a living and during the depression she sold her poetry to famous poets who put their own names on them and sold them to publishers for fame and glory.

Grandma was an Aquarius. I was dreaming about her a few weeks ago when I realized that her birthday just passed. She was born February 3rd, 1922.

Grandma didn’t like to believe in anything she couldn’t explain, hence, she had an explanation for everything. Mostly everything boiled down to bullshit. I don’t know where I learned how to be hopeful, or how. I do know where I got my sarcasm.

I don’t know when Grandma stopped being glamorous. In photos from when I was a child, she always looked impeccable. She went to beauty school when she was a girl. She curled her hair up like The Andrews Sisters and always wore a tailored suit, deep red lipstick and dark green-glassed cat-eye sunglasses. Often she had a cigarette poised between her fingers.

Grandpa always looked good, too. He was a big man with a smooth face. He slicked his hair back and wore dark glasses, too. I think the glasses were Italian. His face was wide and delicately square. He was at least 6’2”, maybe 6”4”. Grandma stood next to him at 5’3”.

I remember loving him so much. Once, I was watching him lean against the kitchen sink drinking a Heineken and smoking a cigarette. It was his usual stance when he had adult company. He always wore a white cotton button down shirt over a white t-shirt (when it was hot he wore just the t-shirt), light brown corduroy jeans and black hush puppies. I knew we were going to be leaving and I was overwhelmed with the thought of saying good-bye. Without warning I ran up too him and as I wrapped my arms around his hips (I came up to his waist when he perched against the sink) he moved his hand and accidentally burned my eye with his cigarette. I screamed and he picked me up and brought me to the sink, rinsing my eyes out with a glass of cold water. I remember him apologizing and looking into my eyes. The fluorescent light that lit the sink hurt more than the cigarette and I felt humiliated that my gesture of love was fumbled and flawed. The more he peered, the worse I felt, the more I cried until I spent the next 15 minutes hyperventilating in his arms and eventually falling asleep. Not wanting anyone to look at me I closed my eyes so I couldn’t see them.

I don’t know when grandpa turned into a wild man; his hair standing on end, his teeth missing in places and his eyeglasses crooked. Probably long before I noticed. I still loved him, how he hummed nameless tunes when he worked, and laughed when he watched his favorite TV shows—Lou Grant, the Rockford Files, All in the Family, Three’s Company, and that detective show—Simon and Simon. 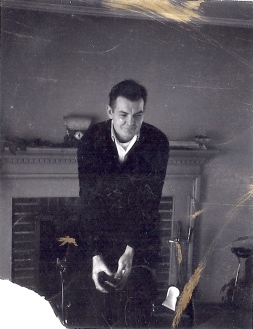