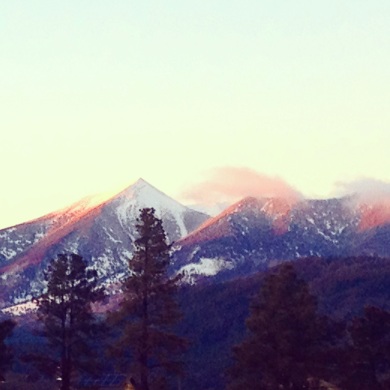 If you have been following my blog, you may already get that I am awed by the beauty of Flagstaff. The landscape and the people here are special, and they are in my heart. A recent city council proposal has come up to ban plastic bags, so I wrote a letter. If you are a resident of Flagstaff, I urge you to write a letter to the city council as well. (council@flagstaffaz.gov) If you live somewhere else, I urge you to start up a conversation in your own community. My letter includes a list of cities across the United States that have already banned the bag – I hope it inspires you.

I love Flagstaff. Coming from New York City, I’m aware that most people from back east don’t even know Flagstaff exists – unless they come out here to visit the Grand Canyon. Every day that I look up and see the peaks and feel the sun shining on my face, I am grateful for this place. We have an ecosytem that is not only unique, but exquisitely beautiful. If people can’t wrap their minds around the environmental damage we suffer from plastic packaging, then, plastic bags and other trash marring the loveliness of our landscape alone should be enough to make people think twice about utilizing single-use plastic bags at the grocery checkout.
While the people of Flagstaff have diverse political backgrounds, I think most of us care about the environment. Banning bags seems like a simple way to begin to protect our surroundings. One shop that I frequent, Natural Grocers, has already done away with using bags at all. Instead, Natural Grocers reuses the boxes their packaged food is shipped in. Brilliant and simple! The shop has a lot less box recycling to deal with and customers make it home with their groceries intact.
I was interested in finding out which cities in the U.S. have banned single-use plastic bags, so I did a little research. First of all, more cities than I thought have banned plastic bags! Some of those cities are pretty big, too – San Francisco (California), Los Angeles (California), Chicago (Illinois), Austin (Texas), Dallas (Texas), and Portland (Oregon) all have bans. Many of the cities have a $.10 to $.25 fee for reusable bags and paper bags. The first person to comment on Eva Putzova’s Special to the AZ Daily Sun, Would A Ban on Plastic Bags Do Much Good? Yes suggests a fee for bags and to “let the market decide.” OK, but make fees expensive, like Brownsville, Texas has done, and charge $1.00 each for reusable plastics and paper bags.
Below is a list of cities in the United States that have plastic bag ban ordinances. The cities in blue have links to their ordinances. The years listed after the cities are when the plastic bag bans went into effect, not when the ordinances were drawn up.
Alaska

Fairfax Fairfax adopted its ban on plastic bags August 2007. After a legal challenge by the plastic industry, Fairfax voters overwhelmingly adopted a plastic bag ban by initiative in November 2008.

Colorado
Aspen 2012
Boulder 2013
Carbondale The Carbondale Board of Trustees approved an ordinance in October 2011. Like Aspen’s ordinance, it bans plastic bags and places a 20 cent charge on paper bags in grocery stores with 3,500 square feet or more. A referendum placed the ordinance on the ballot in April 2012 and voters in Carbondale affirmed the Trustees’ decision. Effective May 2012.
Fort Collins 2015
Telluride 2011

Washington, DC
Washington The District of Columbia Council voted June 2009 to require retailers to charge a $0.05 fee on all carryout bags.

Illinois
Chicago Passed April 30th, 2014.  Effective August 2015 for retailers of more than 10,000 square feet. The ban will extend to smaller chain stores and franchises August, 2016. Small independent or non-franchise stores and restaurants will not be affected.
Evanston 2015

Maryland
Montgomery County The County followed the example of the neighboring District of Columbia and passed a 5 cent minimum price requirement on single-use plastic and paper bags in May 2011. It is effective January 2012. Applies to all retailers.
Chestertown 2012

North Carolina
Hyde, Currituck and Dare Counties The North Carolina Legislatures banned plastic in the Barrier Islands in June 2009. The ban was extended to all businesses in the three counties in 2010.

The above list may be found on Californians Against Waste – National List of Local Plastic Bag Ordinances.

To go even further, I decided to see where bags are banned around the world. This is just a partial list from The Surfider Foundation:

Australia – The Government of South Australia enacted a ban on plastic checkout bags effective May 2009 while the Northern Territory has a similar ban effective since September 2011.  The Australian Capitol Territory passed and enacted their plastic bag ban in 2011 also.  Woorabinda is the first city in Queensland with a plastic bag ban, effective November 2012.  Fremantle was the first city in West Australia to ban thin plastic bags in January, 2013.  Tasmania passed a plastic checkout bag ban in 2013 that is effective November 2013.

Bangladesh – In 2002 Bangladesh was the first country to ban plastic bags, a big reason was that littered bags exacerbated flooding.  Results have been mixed due to a lack of enforcement.

Cameroon – In August 2013, authorities in Cameroon have begun rolling out a campaign to eliminate non-degradable plastic bags by early 2014.

China – In 2008 China banned the manufacture or use of the thinnest types of plastic bags. They also prohibit supermarkets, department stores, and grocery stores from giving away thicker varieties, requiring them to charge customers for the bags.  The government claims big reductions while others claim more enforcement is needed.

India – Efforts are underway to ban plastic bags in various parts of the county but there are no solid reports of effective programs or legislation to date.

Ireland – One of the first plastic bag reduction programs on a large scale started in Ireland in 2002 with their plastic bag fee.  The latest figures (in 2013) suggest there has been a 20-fold decrease since the levy was introduced in 2002.

Italy – In 2011 the Italian government announced a nationwide plastic checkout bag effective March 2012.  Merchants must discontinue the use of traditional single-use plastic bags in favor of bioplastic bags that are biodegradable and compostable or meet other specific requirements.

Ivory Coast – The Prime Minister announced a law banning the production, use and selling of plastic bags in the Ivory Coast effective December 2013.

Mali – The Malian government will ban the production, importation, possession, sale and use of non-biodegradable plastic bags, under a law passed in 2012 and effective 2013.

Mauritania – “Mauritania has banned the use of plastic bags to protect the environment and the lives of land and sea animals.  More than 70% of cattle and sheep that die in the capital, Nouakchott, are killed by eating plastic bags, environment ministry official Mohamed Yahya.”

Northern Ireland – The Northern Ireland Executive passed the Carrier Bag Levy in 2011 and it is effective April 2013.  Retailers in Northern Ireland charge at least five pence for each carrier bag handed out to customers, as part of a drive across the province to reduce plastic waste.

Pakistan – The Islamabad Capital Territory passed a plastic bag ban that takes effect on April 1, 2013.  This law bans conventional plastic bag but allows for ‘oxo biodegradable’ bags, which allows bags to degrade into plastic pieces quicker.  Not the best solution.

Rwanda – A countrywide ban on plastic bags was enacted in 2008 with positive reports through to late 2013.

South Africa – A countrywide levy on plastic checkout bags went into effect in May 2003 with proceeds intended to fund a national recycling program.  Reports have been mixed:  plastic bag consumption is down and litter is likely down but there is no data to accurately report on litter.  A 2010 analysis concluded that the levy was too low to be truly effective.

Tanzania – A countrywide ban on plastic bags has been urged by the federal governemnt since 1996 with minimal results.  Pembra Island has been successful in curbing plastic bag litter according to a 2012 news story.

Wales – The Welsh Government has introduced a 5p minimum charge on all bags (including paper bags) effective October 2011.

Thank you for your consideration and time.

One thought on “Ban the Bag! My Letter to Flagstaff City Council”