I drove the long drive to New York state last November, alone. I thought I was going to have deep thoughts, reflections on the last couple of years in the southwest – how my life had become a precarious balancing act on a crumbling edge. Everything dear to me imploding/exploding/dissolving. How I walked that edge for a long time: terrified of asserting my boundaries, terrified of not asserting my boundaries, basically not feeling safe as an independent creative woman in an increasingly agitated right-wing conservative environment.

I discovered on that trip I was too tired to think – there were no profound contemplations, I just pushed myself to drive, to get back home. The hypnotic glide along the pavement was a relief from all the thinking, all the feeling from the last couple of years.

And everything that was on the edge did fall apart. The end of my relationship with Paul crescendoed in a shouting match in the middle of the night while moving our things out of the house. Weird relationship transgressions killed my security and place in the Lofi Sofias. Booze drenched rehearsals and shows made playing with the Conduits torture. I could see the destruction unfolding, and no matter how hard I held on, I could not help being thrown from the wheel.

In September, I flew to New York to see my mother for her 80th birthday. It was good I did. And I visited New York City twice – it was pure joy to be back. When I returned to Flagstaff in October for my art show, Dreaming in Cyan, at the Heart Box Gallery, I understood living in Arizona was living in a place where it felt dangerous to be an intelligent female. It felt perilous to express myself fully. I was creatively and emotionally stifled. I was tired and bored of playing small. It felt risky to be myself. Feeling fearful while trying to hold the mess of my relationships and creative collaborations together was madness. 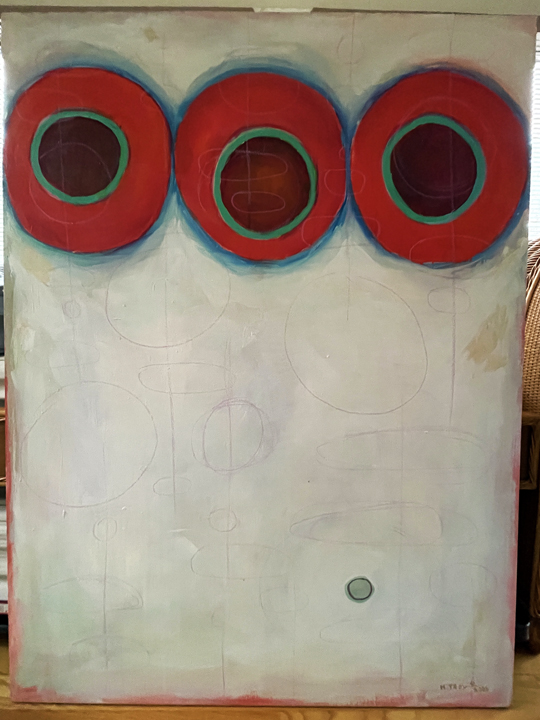 And the journey hasn’t been for nothing. I have found my heart in my travels – there are a few very good people out west. A few lifelong friends with souls as big as the sky. The pure silence of the forest, the smell of pine trees. Kaibab squirrels, with marvelous tufts of fur on their ears. Prairie dogs and road runners. The powerful seduction of late summer evenings, sunsets beyond your imagination, and the magic of mountain biking, swiftly gliding through the woods at night.

And there is a hardness out west, too. Like the unforgiving nature of the desert, there is a black-and-whiteness, a this(ness)-or-that(ness), a cold-heartedness in relating that I was unable crack. I didn’t fit in – at least not for longer than a few moments while in the wide open west. Unless I was completely alone. Alone on my bike, alone hugging trees, alone in the forest. And being alone is fine, until it isn’t.

After fifteen years in Arizona, that feeling of alienation did not go away.

For now, I am back in New England. I have had six months of navigating New York City, the southwest, and New York State.  My feet are on the ground and yet, I feel more fluid, more flexible than I have felt in a long while. Last fall, when I returned to the east coast, I realized this is where my people are. My heart-centered people. People who are grateful to be alive, and to relate, and to have the stimulation of one another, of creative connection, and the miracle of tender humanity.

This is home. Even while I’m trying to figure out where to eventually land here – it’s home. No more exile.

And! I am setting up studio where I am staying.

Last September, I resurrected this painting. It had been in a smoke-filled room for 15 years – neglected, nicotine-stained, and dirty. I cleaned it, and decided to give it some love and push it in a new direction. Like me, this piece has its foundation, and, is just at the beginning of arising from the ashes – ready to take on a new form.

Another note on relating:

Since being here – it’s not like my boundary challenges have disappeared. Some are more in my face than ever. But, I’m learning to have the willingness to assert my boundaries when the need arises, or better yet, when I notice they are about to be crossed. It’s taking practice, and it’s good. I don’t have to tolerate bullshit. I can state my deal breakers. I’ve got too much to do, so many good people to love. And really, I have nothing to lose, I’ve already lost it all – so why not rebuild my life in a way that makes me happy?

Check out my work for sale.

3 thoughts on “Surrender to New Life”